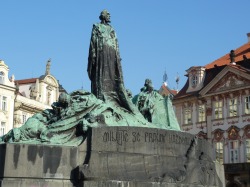 Czech historical accounts acknowledge extraordinary events that altered the course of the nation. In the 15th century, Jan Hus (John Huss) a priest, leader and rector at Charles University became a vocal advocate against the abuses and indulgences of the Catholic Church at that time. Inspired by John Wycliffe, he not only embraced the early stages of reformed theology but he also taught and preached in Czech at Bethlehem chapel. His greatest desire was to teach the authenticity of the gospel to this people in their own language. As expected, such bold and novel stance was not endorsed by conventional religious powers and yet, the number of his supporters multiplied expeditiously within the region. Eventually, his teaching and writings were banned and he was denounced as a “heretic” by the church dignitaries. As result, he was condemned and burned at the stake on July 6th, 1415 (now a national holiday). A century later, the reformer Martin Luther, stated after studying Huss’ sermons: “I was overwhelmed with astonishment. I could not understand for what cause they had burnt so great a man, who explained the Scriptures with so much gravity and skill.” At present, Jan Hus’ sculpture stands prominent in the middle of Old Town Square overseeing his beloved city.

On 5th of January, 1968, a stirring movement awakened Czech consciousness. Newly elected leaders initiated a number of liberal reforms to improve the rights of its citizens, business and commerce as well as more freedom for the press and travel. Given the constraints of their charge, the liberalization of Czechoslovakia was a brave aspiration fiercely opposed by the soviet bloc. Finally, on the 21 of August of the same year, soviet tanks and forces from the Warsaw Pact invaded Prague determined to end the Czechoslovakian “anti-soviet” revolutionary acts. Yet, these events inspired artists and writers to articulate their stories into dramatic works such as The Unbearable Lightness of Being by Milan Kundera. Within twenty years or so the winds of change could no longer be restrained. Thus, in 1989, the peaceful “Velvet Revolution” proceeded to generate major changes. It deposed and ended the communist political control while creating new possibilities for national identity, growth and development.

Today, the Czech Republic is a stable blossoming republic with a self-determined and entrepreneurial spirit. The process of starting a business in the Czech Republic is fairly straight forward and there are multiple agencies that can guide an entrepreneur through the process. My experiences in working with Czech nationals have been positive as they pride themselves in providing efficient and timely services. Seasoned professionals able to provide profitable consulting services are in demand while new start-ups are eager to become formidable forces of influence within Central Europe and beyond. Hence, the city of Prague has achieved its business friendly status because it continues to expand a sustainable infrastructure and development (telecommunications, energy, roads, railroads, and airport). Not surprisingly, on any given week the city hosts an array of international expositions, conferences and meetings. Accordingly, Prague offers a bountiful and thriving environment where an investor and entrepreneur can test, develop, and implement an idea with confidence.