The ridding school and stables, Troja 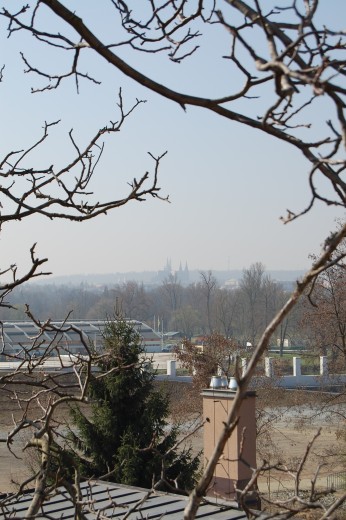 Prague City center in the distance

During my first day in Prague, I walked around the streets near my hotel.  The temperature had dropped drastically. Yet, to my surprise, the sun was still shining and the streets were filled with people speaking a variety of languages.  However, before I could leap into the next narrative, I had to first address pressing matters such as: where am I going to live for the next 8 months? After living around the world, one of my routines is to identify a haven.  The idea is to find the right place to live as soon as it is feasible. Moreover, this exercise has allowed me to integrate faster into each new reality.

Before moving to Prague, I had contacted an international real estate company that I had used in the past, Engel & Völkers.  They usually serve major metropolitan areas worldwide and the properties they represent whether you are buying or leasing are of high quality.  In Prague, I was pleased to receive the same professionalism as before.  As a matter of fact, the first property the agent showed me was “the one.” I not only fell in love with the apartment but also with the neighborhood,Troja. I moved two weeks later as the snow was melting.

My apartment was located on the hills of right bank of the Vltava river. My mailing address identified the area as Praha 7.  The apartment had 3 terraces with excellent views. The living room’s terrace faced the rushing river, a riding school and stables across the river. Most mornings, I would sit outside sipping an English breakfast tea while reading the Financial Times. But of course, every now and then I would lift my eyes just to glance and admire the view. From this terrace, you could also see on a clear day the tip of the Prague Castle. The kitchen terrace faced the interior streets of the complex. These streets were beautiful in the winter and glorious in the spring when railing balcony and window planters bloomed in each dwelling. Before long, the scent of countless flowers and exotic herbs filled the air. Lastly, the third balcony outside the main bedroom faced the hills and the outer edge of the botanical gardens.  Soon, this new haven became a home…

On March 2010, as I admired the Florida sun setting in the firmament, I received a phone call announcing that my next destination was Prague. I was not simply going for a visit; I was going to live in Prague for at least 8 months. My lips greeted the news with enthusiasm and soon I began to read all about the nation and its history. Two weeks latter my plane landed in a familiar territory: Milan, Italy.

Typically, if the opportunity is available, I prefer to use ground transportation. Thus, at “Milano Centrale” railroad station, I bought a one way ticket on a sleeper train to Prague. The convoy’s trajectory encompassed four countries: Italy, Germany, Austria and Czech Republic. At 15 minutes before departure, a melodic boarding call alerted everyone to take their places. The individual quarters were comfortable and I received a small “bon voyage” basket filled with fresh fruit and cheese. These little morceaus were welcomed since the journey was about 14 hours long. However, since I slept for the most of the trip, it was pleasant way to travel.

The trip began uneventful and I woke up early in the morning to change trains in Munich. Then, somewhere after the Austrian/Czech border the train came to a halt.  I communicated in German and a crew member answered me politely using an unusual blend of Czech and German languages. Thus, my hazy appraisal was: a rail malfunction had occurred, we were asked via gestures to come out of the train with our luggage and … wait. As we disembarked and unloaded our luggage, we identified that our minute train station was an open structure. A Swiss passenger looked at me with admiration and stated: “Such a little woman and such large suitcases…”  I replied with a mystified smile as our empty train moved gradually away from our view.

There are moments in life when after completing a task, you lift up your eyes and you finally take notice of your surroundings. At that instant, all I could think was: Doctor Zhivago! Do you remember when in the film doctor Zhivago the train halts in the middle of nowhere and all around are endless fields of snow?  There I was, consuming the same magnificent view, inhaling the crisp air and yet able to feel the frail warmth of the sun. Certainly, this interlude was lasting!

The passengers were a medley of British families on holidays, a group of Swiss backpackers, different groups of lively Italians, old, young and even a priest. Without much awareness, all passengers had stacked their luggage neatly on the edge of the field. Hence, as I sat quietly on my suitcase, I did not worry. I was well prepared! In Milan, I had bought a jar of olives, a Swiss chocolate bar, 2 Kiwis, a baguette, 2 bottles of water and a book on “The Comprehensive History of the Hapsburg Empire.”  Yet, my deep thoughts were interrupted when everyone started to share their commodities with glee and rich conversation began to thrive. Two young Italian minstrels seized their guitars and started to harmonize sounds of love and bliss.  As result, this meeting of nations together with the “breaking of bread” allowed two hours to elapse swiftly, and then modern Daimler buses arrived to our rescue. Once inside the bus, we were offered delicious hot chocolate, coffee and tea. Finally, we were on our way to Prague.

Throughout my childhood, my imagination was captivated by stories of adventuresome individuals and their discoveries of distant lands. My fascination was certainly brought to life when at age 10, I was able to be part of a transoceanic voyage from South America through the west coast of Africa, to the Canary Islands all the way to Scandinavia and finally arriving at the Port of Hamburg (ger. Hamburger Hafen), Germany. This seafaring adventure was one of the most exciting things that ever happened to me. Thus, such early experience was the pivotal element in fostering my love for travel and a yearning to see the world.

My travel’s recollections compel me to make a distinction between two words: “traveler” and “tourist.”  In my opinion, there is a remarkable divide between these two terms and paradigms. Dictionary definitions state that a traveler is: “a person who travels, or has traveled in distant places or foreign lands.” I would further speculate that a traveler is a person who journeys for an extended interlude of time, and who has the curiosity and perhaps the courage to experience different cultures, lands, tastes, and smells etc. Thus, the traveler’s discoveries evolve with each experience as every place has its own unique “language” for communicating their story and authenticity.

In contrast, the word tourist has been defined as: “as person who visits a place; a vacationer.”  The term may imply a short cycle of time and a brief encounter with culture. It seems that the aim here is not necessarily to engage with the new surroundings or customs.  Rather, the essence of this experience is based on pleasant instances where nominal cultural exchanges are the norm.

In retrospect, I have followed both paradigms intuitively by tailoring the best approach to circumstances of the journey. Thus, with a camera in hand, I have aimed to re-frame the visual dialogues that have generously dwelled within my personal chronicles. However, in my heart, I will always be a traveler whose memories remain souvenirs of time, places, individuals, cultures and incidents that are relevant to me.  These have enriched my soul while educating my senses and intellect to cherish with passion a montage of memorable explorations and discoveries.