Philip the Good and Isabella of Portugal 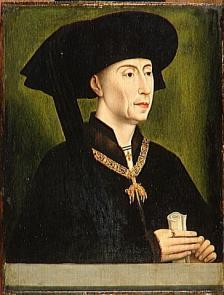 Philip the Good, Duke of Burgundy

Territories of the house of Valois-Burgundy during the reign of Charles the Bold, 1465 – 1477

Mary of Burgundy only daughter/heiress of Charles the Bold

Palace of the Duke of Burgundy

My first impressions of Burgundy were as serene and uncomplicated as the surrounding landscape with golden vines basking in the sun. Certainly, I had visited Paris and the northern part of France before. However now, I was heading out by car towards my new home southeast of Paris in the east-central region of France. Drawing near my final destination, I found myself admiring with inquisitive satisfaction a completely different terrain with unexpected rolling hills graced with ripe vineyards, orchards, farmsteads, alluring medieval villages, châteaux and Roman fortresses garlanded by rivers, a few lakes and streams.

Historically, Burgundy fascinated me especially after reading an assortment of sources capturing the grandeur of ages past when the Valois dukes of Burgundy (fr. Ducs) ruled the region with rich and inexhaustible support for the arts, architecture, and music. Their intense interest in commerce also flourished especially in the Low Lands (Belgium and part of Netherlands). Unfortunately, there was a great contrast between their lavish lifestyle and the average man. Still, a budding bourgeois class of merchants embarked with verve on fruitful trade opportunities and Dijon became part of a strategic trade route. Before long, the dukes of Burgundy had perhaps more power than the king of France.

The most famous dukes of Burgundy ruled during the 14th and 15th centuries. The first Valois duke, Philip the Bold (reign 1364 – 1404)  strategically organized his domain by marrying the affluent Margaret of Flanders in order to increase his territorial power and sphere of influence. As such, he was able to organize a solid base for his state though he spent much of his wealth in the arts. During his reign the “Dijon School” flourished with artists from the Low Lands such as the sculptor Claus Sluter. After his death, his son John the Fearless (reign 1404-1419) became the next duke of Burgundy. Notorious for his calculating political savvy, he was also brutal in battle ordering the death of his opponents in particular his main rival, the duke of Orleans. His conquests and secret alliances allowed him to consolidate his power base as his support for Henry V, king of England intensified. He was assassinated in 1419 and his son John the Good, came to power.

John the Good (reign 1419 – 1467) was twice-widowed without any surviving issue. Due to his political alliance to England, he pursued a third marriage agreement with a noble-titled heiress who had also long-lasting ties with England. As result, he married Isabella, the infanta (princess) of the house of Aviz, Portugal and cousin to Henry V of England. Isabella was very well-educate, dutiful and upon her father’s instructions she received the same excellent cultural and educational upbringing as her brothers. She grew up in the court of Lisbon, well-versed in the affairs of state as well as being fluent in Latin, French, English and Italian. She was very religious and fond of the arts, hunting and riding. Philip the Good appreciated these attributes as complementary to his ambitions. Thus, he married Isabella and came to highly trust her with affairs of the state. When her husband went to battle or left the region she was the regent of Burgundy and the Low Countries. Likewise, her influence became a contending leverage in the midst of commerce and trade negotiations with the English in 1439. The duke and duchess had three male heirs including the future duke of Burgundy, Charles the Bold. In due course, the court in Dijon began to soar while eclipsing the French Court culturally and economically.

Demand encouraged Philip the Bold to launch a productive shipyard in Bruges with the help of the skilled Portuguese shipbuilders. Moreover, he profited greatly from the sales of luxury goods and illuminated manuscripts in the Netherlands whilst maintaining palaces in Brussels, Lille and Bruges. Philip the Bold upheld the dynasty’s commitment to the arts and to the patronage of Flemish artists such as Jan van Eyck who painted portraits of the duke and Isabella of Portugal. He also commissioned a number of tapestries and fine jewelry. His consistent patronage empowered the Burgundy School of Music considerably. Hence, musicians and singers progressed to build a renowned music center with celebrated composers such as Gilles Binchois and Guillaume Dufay. Militarily,  Phillip the Bold and his aggressive army captured Joan of Arc at Compiègne in 1430. Afterward, they delivered her into the hands of the English to be burned at the stake. He was advanced in years when he died in Bruges and his son Charles the Bold ascended into power.

Burgundy at that time had become an extremely powerful duchy. Per contra, Charles the Bold (reign 1467 – 1477) had a tumultuous reign given that most of his energy was spent establishing Burgundy as an independent sovereignty. By contrast, since he played the harp and composed a number of musical pieces, he also encouraged lavish banquets and pageantry while endorsing the advancement of the Burgundy School of Music.

Still, his aspiration for an independent state grew each day and he came very close to fulfilling his ambition. Accordingly, wars, treaties and purchases extended and solidified his territory from Burgundy to the Low Lands (Netherlands and Belgium), the far-reaching duchy of Luxembourg, Picardy, Artois, Lorraine, S Baden, Alsace, the Franche-Comté, Nivernais, and Charolais. He activated negotiations for the marriage of his only daughter Mary to Maximiliam son of Emperor Frederick III, King of Germany, and head of the Hapsburg Empire. He thought that this would further assist him not only to enlarge his territories but also to assure that his quest for an independent kingdom would succeed. Tragically however, he was killed in battle at the siege of Nancy in 1477 by the Swiss. After his death, a spiraling decline of the state commenced. Since his daughter Mary married Maximilian part of the realm was absorbed into the Hapsburg Empire and the rest was granted to France. Unequivocally, the enthralling chapters of Burgundy’s history formulate a concoction of a splendid voyage and exploration!

Arriving in Dijon at dusk, I steered myself toward the most fitting hotel for the occasion, Hotel Philippe Le Bon (Philip the Good). This marvelous boutique hotel situated in a quiet street in Dijon’s centre ville was full of charm and it was the right choice for someone visiting Dijon for the first time. When I approached my room, I laughed softly with amusement as room number 40 was named: Isabelle de Portugal, my middle name! I decided to view this correlation as a herald of things to come together with a great sense of interest and enthusiasm for all the possibilities ahead.